We’ve got a guest in our kitchen today… The very talented Mardi of Eat. Live. Travel. Write.
You may recognize Mardi from over at the Mushroom Channel, where she did some fabulous guest posts last year… but we have since stolen her away, and now she has two delicious guest posts in store for us!

Hi, I’m Mardi and I write the blog eat. live. travel. write. I’m so excited to be posting here at Mushrooms.ca, mushrooms being one of my favourite vegetables, not just for their taste but their incredible versatility in many dishes. On my blog, I write about my culinary adventures, both near and far. I am an avid traveler and one of my favourite souvenirs to bring back from my trips is recipes. Recreating a dish we have enjoyed on vacation is the next best thing to being there! Of course, bringing back some food items from your travels is also a great way to extend your vacation too! 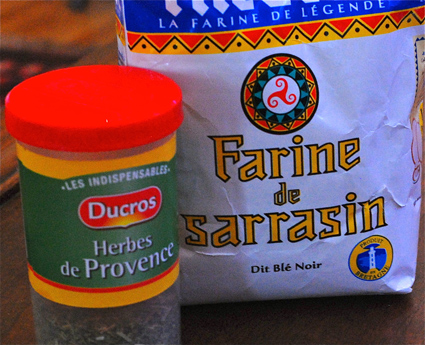 The inspiration behind the dish I am sharing today comes from a region of France that I absolutely adore. We spent a week in Brittany just over a year ago, around New Year, and one of our favourite tastes of the region was the ubiquitous galette au sarrasin. What’s a galette, I hear you ask? Well, it’s what most French crêperies call savoury buckwhat flour pancakes, (ones made from regular flour, and served with a sweet filling, are called crêpes. The galette is popular in Normandy and Brittany where buckwheat was introduced as a crop suited to poor soil. The Breton galette is cooked on one side only and filled with egg, meat, cheese, vegetables etc… The galette is folded over the filling to leave some of the filling still peeking out. One of the most popular varieties is a galette covered with grated Emmental cheese a slice of ham and an egg, cooked in the galette. In France, this is known as a “complète“.

We ate all sorts of varieties of galette during our stay – both savory and sweet and it’s been my goal to try to recreate some of these here at home. In Brittany, we ate galettes for both lunch and dinner but never for breakfast, even though it seems like the perfect dish – a perfect canvas for all sorts of creative filling combinations. Omelettes are great for breakfast (and I particularly love mushroom ones!) but sometimes you just don’t want eggs for breakfast. A galette filled with Emmenthal cheese, thinly sliced Black Forest ham and herb-sautéed mushrooms is a light, yet satisfying way to start your day and something a little different from the usual breakfast/ brunch fare. 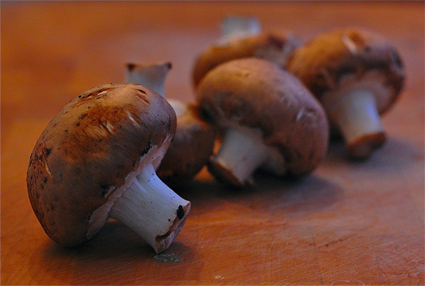 For this recipe, I used cremini mushrooms. Part of the Agaricus bisporus family to which most common mushroom varieties belong, the cremini lies between the common button variety and the portobello mushroom in age, meaning that it’s not quite as brown or as large as the portobello but darker and larger than button mushrooms. The age difference also means that the cremini are slightly firmer than the button mushroom, making it perfect for a dish where it’s going to be lightly sautéed as it will hold its shape better than the younger white mushrooms. I also happen to really like the look of the cremini variety.

One of my favourite ways to eat mushrooms is simply sautéed in butter and served on toast. It was a standard meal for me when I was a poor student in Paris in my 20s! This recipe is a nod to that simple preparation, with a touch of herbes de Provence and mushroom stock to really pack a flavour punch and heighten the “mushroomy goodness” inside the galette.

Directions:
Mix the flours together, making a well in the centre. Add the egg yolk and mix until combined. Slowly add first the milk, then the water, incorporating with a whisk until you have a smooth batter (it will still be a little thick at this point but as long as it’s smooth, you’re good).
In a separate bowl, beat the egg white and salt until it forms stiff peaks and then fold into the batter with a rubber spatula.
Cover and refrigerate for an hour or overnight.

Ingredients for the filling for one galette (just make as much as you need):
4 large cremini mushrooms
2 tablespoons butter
1/2 teaspoon herbes de Provence **
1/4 cup mushroom stock (ideally mushroom or you could use whatever you have on hand)

Directions:
Melt the butter over a medium heat in a heavy bottomed skillet. Add the herbs de Provence and sauté for a minute or so. Add the mushrooms and coat with the butter and herbs. Sauté over medium heat until softened – a couple of minutes. Turn up the heat slightly and add the stock. Simmer until the liquid has mostly evaporated, a couple more minutes. Drain on paper towels and set aside.

Assembly:
Notes:
1. When you take your batter out of the fridge, you might need to add some more water or milk. The batter should be fairly thin – think smoothie consistency.
2. You will probably have a couple of galettes that don’t work out the first time. Usually I find it takes a couple to get into the technique!

Heat a large non-stick frying pan over medium heat. You might like to melt some butter (about 1 tablespoon) to start with and after every 2-3 galettes, depending on how “non stick” your pan is. One of my pans does not require any butter, some of my older ones do.
Using a half-cup measure, pour batter into the centre of the pan and immediately swirl the pan to spread the mixture – you’re looking for a galette that’s about 8-9 inches across so it will be very thin.
As the edges begin to crisp up a little, make sure the galette is not sticking, especially in the centre. I use a large, thin plastic spatula to keep this in check.
You’ll know the galette is ready to flip when it’s completely dry looking on top. It might bubble and look a little “lacy” but that’s fine – in fact that’s perfect!
Flip the galette carefully and immediately add the cheese in the centre. Once the edges of the cheese have started to melt, add the mushrooms, saving a couple for garnish. Press them into the cheese. Cook a minute or so then add the ham.
Fold in the sides of the galette to slightly cover the fillings. Traditionally the galette is served in a square shape with all four sides folded in but I kind of like with just two sides folded over (oh, and it’s pretty hard to make it stay folded when it’s all four corners!).
Top the completed galette with the mushrooms you set aside and a sprinkle of chives.
Bon appétit! 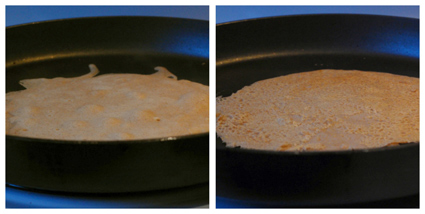 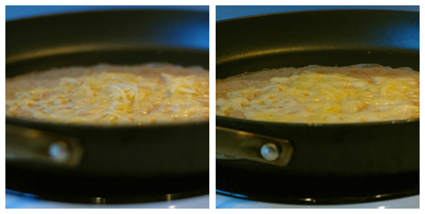 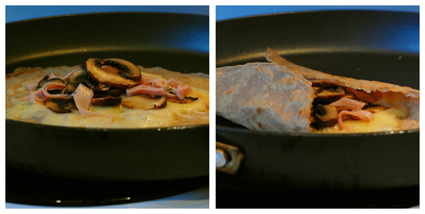 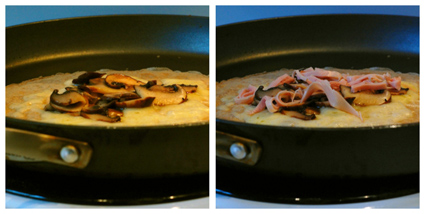 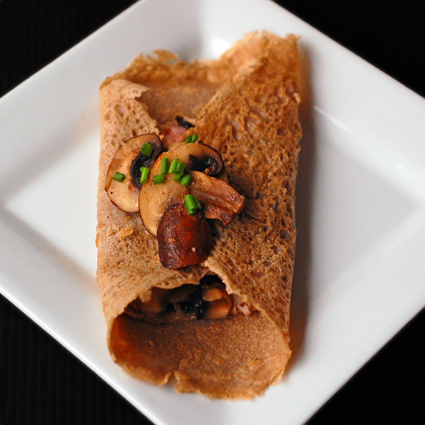 **If you can’t find herbes de Provence, you can easily make your own mix to store in an airtight container for future use using the following formula:

~~~~~
Thanks so much Mardi for being our guest.

Mardi will be back here again later in the year for another guest post and a delicious mushroom recipe, so stay tuned!