As a scientist, nature freak and self-proclaimed foodie, I find it difficult to imagine a world without mushrooms. 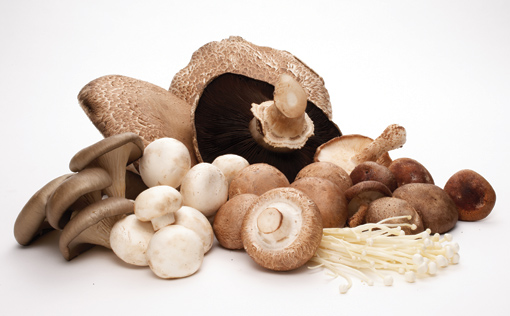 Call me a nerd, sure, but fungi have had an enormous impact on humankind in ways we just don’t appreciate in our day-to-day lives. I am not referring to the necessity of fungi in just about every ecosystem on Earth, nor to their contribution to our food supply in the form of baked goods, fermented foods and certain alcoholic beverages. What could be more important to human civilization than beer, you ask? Simply put, fungi have played an uncontested role in the maintenance of human health and wellness for thousands of years. In fact, they were the original wonder drug. The Chinese called them ‘the elixir of life,’ and a blue mould was the source of the antibiotic that revolutionized medicine. Even Ötzi, the 5300-year-old Iceman found frozen in the Alps, carried a collection of therapeutic fungi in his pack. Medicinal mushrooms are clearly not new, but recent research into their bioactive compounds has drawn attention to the impact of mushrooms on immune function. With cancer one of the leading causes of death in North America, this crucial finding has made mushrooms—and the anti-cancer drugs derived from them—seem fresh again. Could medicinal mushrooms prove to be a miracle drug once more? You’ll have to keep reading to find out.

An Introduction to Mushrooms
Before I convert you into a fellow fungi fanatic, it is important to understand the biology of these interesting yet misunderstood organisms. The kingdom Fungi are an extraordinarily diverse group that range from microscopic unicellular yeasts to multicellular macrofungi. The two main groups, or phyla, of fungi are the Basidiomycota and the Ascomycota. The former category encompasses some of the more well-known fungi like toadstools, bracket fungi and puffballs, while the latter includes truffles, morels, yeasts and moulds. When we think of a mushroom, the classic umbrella-shaped fungus automatically comes to mind. But not all fungi have mushrooms, and not all mushrooms look like the ones we’re familiar with. The word ‘mushroom’ is a loosely-used term that actually refers to the macroscopic fruiting body of a fungus. According to Brittany Stager, Marketing Manager at Mushrooms Canada, “the fruiting body is the structure that bears the spores, or reproductive material.” If you imagine the anatomy of a plant, the fruiting body would be roughly equivalent to the plant’s fruit or flower, while the spores would be akin to the seeds. Some experts take the definition further and consider only fruiting bodies large enough to be picked by hand to be true mushrooms. Fruiting bodies are extremely diverse in form; some look like amorphous globs of jelly, while others are reminiscent of coral, birds’ eggs or starfish.

When we refer to mushrooms in cuisine, we are talking about the fruiting body of an edible fungus that can be sliced, diced, simmered or eaten whole. “Among the most popular mushrooms used in cooking are white, portabella, shiitake and oyster mushrooms,” explains Stager. But the ‘lower’ fungi are still important to the food industry even though they do not produce mushrooms. Moulds and yeasts are used as ingredients or processing aids to make a variety of foodstuffs like blue cheese, soft drinks and leavened baked goods.
The vast majority of mushrooms, whether edible or not, contain a host of bioactive compounds. The fruiting body houses antioxidants like the amino acid ergothioneine, the fatty acid conjugated linoleic acid and various phenolic compounds. But the most heavily researched active constituents found in mushrooms are the polysaccharides, a group of carbohydrate compounds that include proteoglycans. But more on those later.

Mushrooms: The Original Miracle Drug
Like so many other foods known to behave like drugs in the body, the science has only recently begun to reveal what ancient cultures have known about mushrooms for millennia. Mushrooms have been used in traditional Eastern medicines to treat conditions ranging from heart disease, stomach upset and diabetes to infections, liver problems and cancer. Although more than 270 species of mushrooms are thought to have drug-like properties, the main medicinal species used historically are the reiishi (Gandoderma lucidum), shiitake (Lentinus edodes) and maitake (Grifola frondosa).

We have since found ways to transform the pharmacological elements of mushrooms into modern drugs thanks to advancements in technology. Many of today’s most important pharmaceuticals—immunosuppressors, statins, antibiotics and more—were originally derived from fungi. In fact, one of the most significant contributions to medicine was all thanks to some stubborn mould. In 1928, scientist Alexander Fleming left a dish of bacteria he had been working with unattended while on holiday. When he returned after a few weeks, he was irked to find pesky mould growing on his specimens. But like any good scientist, Fleming was intrigued by the odd bacteria-free halo surrounding the blue mould. What was it was that made the pathogenic organisms unable to grow there? The mould turned out to be the fungus Penicillium, and the antibiotic penicillin was officially born. Penicillin proved to be a saving grace for humankind as the years went on, helping us treat fatal bacterial infections that were previously impossible to cure. The following decades brought increased lifespan and improved quality of life for the majority, shifting the need for a cure away from acute infections and toward chronic disease. So while the problem today is different, the story remains the same: cancer is now a major cause of death for which we have no cure. Could fungi again be our key to survival? A surprisingly consistent body of evidence says yes.

The earliest study showcasing the anti-cancer powers of mushrooms was published several decades ago. Extracts of the common porcini mushroom (Boletus edulis) inhibited tumour progression in mice implanted with human cancer cells. Promising to be sure, but could the same benefits be achieved in humans? To put these findings into a real-life context, researchers studied the cancer death rates of more than 100 000 Japanese mushroom farmers over a span of 15 years. The study was based on the assumption that the farmers would eat at least some of the edible enokitake (Flammuline velutipes) they farmed more than those who did not grow mushrooms. The research proved fruitful: the rates of death from cancer were roughly 165% higher in people who did not regularly consume mushrooms. But the observational nature of this investigation still left questions unanswered. Do mushrooms cure cancer or simply prevent it? How much do you have to eat to obtain the benefits?

Mushroom Immunoceuticals and Cancer
Many of the active substances found in mushrooms—particulary proteoglycans—act as immunomodulators. An immunomodulator is a substance that influences the functioning of the immune system when introduced into the body. Mushroom compounds that are immunologically active when eaten have been dubbed ‘immunoceuticals,’ a subcategory of nutraceuticals. Dozens of mushroom species contain immunoceuticals, yet only six of these have been tested in humans.

Why is immunomodulation important? For one, the immune system plays a critical role in our ability to fight diseases such as cancer. A healthy immune system is made up of different types of white blood cells that work together to defend the body. The main job of the immune system is to recognize these foreign or harmful substances and eliminate them. Sounds simple enough, but cancer cells have found a way around our natural defences. Even though the immune system is supposed to recognize the cells as invasive, cancer cells have mechanisms that make them especially good at evading this response. This is why cancer is so difficult to cure, even with potent treatments like chemotherapy and radiation therapy. Surgery is somewhat effective at removing tumours, but chemo and radiation are usually employed to make sure any remaining cells are destroyed. And while conventional therapies may seem like a good option, they can severely weaken a patient’s immune system and cause debilitating side effects
.
This is where mushrooms shine: the six immunoceuticals extracted from certain fungi have shown huge potential as valuable cancer therapies. Interestingly, the following compounds that have displayed the most promising anti-cancer effects are derived from seemingly ordinary mushrooms:
• Lentinan – an extract of the popular and delicious shiitake mushroom (Lentinus edodes);
• Schizophyllan – derived from the world’s most common and widespread mushroom, the Split Gill (Schizophyllum commune);
• AHCC (Active Hexose Correlated Compound) – a proprietary blend of extracts from several mushrooms, namely shiitake;
• Maitake D-Fraction – a preparation from another widely-used Japanese mushroom, the maitake (Grifola frondosa);
• PSK (Polysaccharide-K, also known as krestin) – an extract from the multi-hued Turkey Tail mushroom (Trametes versicolor);
• PSP (Polysaccharide-peptide) – also derived from the Turkey Tail.

Of these six cancer-thwarting substances, PSK and PSP have undergone the most testing in humans. PSK and PSP are large molecules called proteoglycans that are made up of small proteins and repeating sugar units. Proteoglycans have a branched centipede-like shape, with the long protein backbone as the body and the shorter sugar chains as the legs. This pronged configuration allows the compounds to interact with human cells in a complex way. This is an especially important attribute when it comes to carrying and transmitting information from one cell to another. In this way, PSK sends a message to stimulate a sluggish immune system, strengthening the body’s defences against cancerous cells.

There is now more than fifty years’ worth of clinical evidence supporting PSK’s activity against esophageal, stomach, colorectal, nasopharyngeal and lung cancers in humans. PSP has shown similar hopeful results in human studies, mostly against cancers of the stomach, esophagus and lung. And unlike toxic chemotherapy and radiotherapy, PSK and PSP have shown virtually no negative side effects in patients. In most studies the mushroom-derived substances were used in conjunction with conventional therapies to improve patients’ overall quality of life. The most remarkable finding of all? The ability of both PSK and PSP to increase survival rates in patients with certain types of cancer. Now that’s impressive, even for the already remarkable fungi.

Despite the solid body of evidence to date, more research is needed to determine how exactly mushroom proteoglycans behave in the body, how they are metabolized and what dose, frequency and route of administration is most effective. It is also important that any interactions between mushroom compounds and chemotherapy are identified and understood, since herbal remedies can influence how the body processes the chemicals. Still, certain mushroom compounds have already been approved as prescription drugs in Japan, China and Korea. The next step toward getting these promising agents into routine use in North America is the completion of more well-designed clinical trials. Until then, we can only hope mushrooms will live up to their reputation as ‘the elixir of life’ and help improve the health of humankind for centuries to come.

~~~~~
Thanks so much Jennifer for joining us as a guest blogger. For those of you who missed Jennifer’s “Canadian Food Blogger’s We Love” profile, you can find it here.

Don’t forget to follow Jennifer over on her blog The best thing I ever ate…and then some, and on Twitter.
…