We have a guest in the kitchen! Fresh off of our stint at the 2013 Toronto Gourmet Food & Wine Expo, we knew we had to get this recipe for mushroom mac n’ cheese. Chef Professor Olaf Mertens of Niagara College’s Canadian Food and Wine Institute has been kind enough to share his recipe with us today! We know you’ll love it as much as we did!! 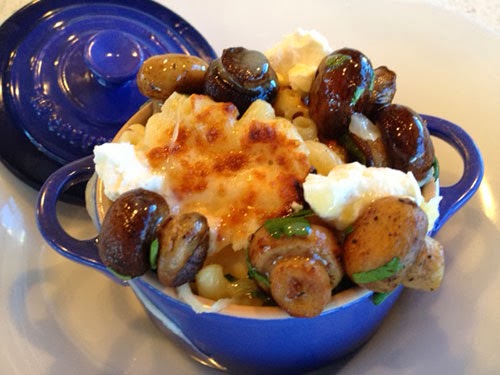 Cook pasta noodles until al dente, then strain the noodles and let dry, do not rinse noodles with cold water.

In a large frying pan heat over medium high heat and add in oil. Add in polished clean mushrooms and roast until golden brown, season and deglaze with chardonnay wine. Reduce wine by 50 % of its volume, splash in the vinegar and start to stir in the cold butter cubes. Season to taste and drop in fresh herbs, now spoon on the Mushrooms over the mac and cheese.

DIRECTIONS FOR PREPARATION In a pot over medium heat, add in butter and saute onions until translucent. Dust onions and butter with flour and stir, then pour in cold milk and stir well, until sauce mixture appears. Season with spices and fold in the cheeses. Mix the noodles with 3/4 of this sauce and place into a baking dish and sprinkle the 1/2 cup of cheddar and bake at 350 F for 10 minutes. Pour extra sauce on top and sprinkle with goat cheese crumble. 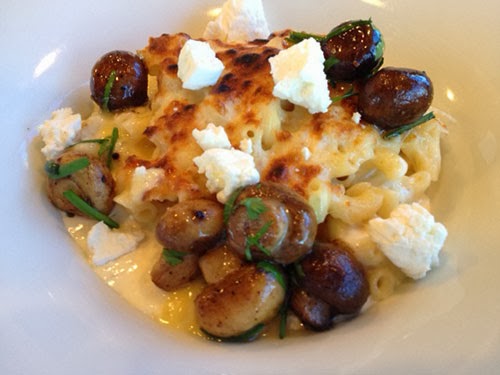 From the childhood summers in Germany stirring his Oma’s giant pots to washing pots for popular chefs, Olaf Mertens always wanted to be a chef. He left Canada for Germany at 18, starting a culinary apprenticeship that led him to cooking in Budapest and helping a grand five star hotel celebrate Berlin’s 750th birthday. He earned the honor of a Top Skilled Apprentice for the Class of 1989 and was then awarded Berlin’s Apprentice of the Year in 1989. He then spent eight years at Rogues Restaurant in Mississauga, Ontario, leading it to awarded one of the top 40 restaurants in Canada. He then left Canada again to return to Germany where he successfully completed the grueling Küchenmeister in the Steigenberger hotelier school in Bavaria. As Captain of Team Canada in international competitions, he led a talented team of chefs to compete for two consecutive silvers medals in Limerick, Ireland and Dallas, Texas. His experiences led him to where he was the last 13 years, as executive chef, founder and partner of three Mississauga HIP Restaurants, On The Curve Hot Stove & Wine Bar & Ten Restaurant & Wine Bar and West 50 Pourhouse and Grille, as well as his catering division, Catering…from the HIP. Olaf has had appearances on the food networks; Summers Best, Sugar and guest chef spots on other television and radio broadcasts. His cookbooks are Cooking from the Hip and Olaf’s Kitchen: A Master Chef Shares his Passion. Olaf has a very strong bond with his Mississauga home town community contributing to several local charities and events. When he’s not cooking up a storm, he is at home with his wife of 21 years, Jennifer and his three sons, Nicolas 19, Taylor 16 and Owen 13. 2010 began a new chapter as Olaf takes on a new challenge. He has joined the Canadian Food & Wine Institute at Niagara College as full time Chef Professor. He looks forward to sharing his knowledge and experiences as he teaches young cooks the skills of the professional kitchen.

It’s such a treat to get a Chef’s recipe and I can’t wait to make this at home. I’ve been dreaming of it since I tried it at the Toronto Gourmet Food & Wine Expo. Thanks so much to Chef Professor Olaf Mertens of Niagara College’s Canadian Food and Wine Institute for sharing this creamy comfort dish with us!