Frittata is an Italian version of an omelet that has the vegetables mixed in with the eggs and since it is not folded but served open face, it is easier to handle. It may be baked in oven or cooked on top of stove and served any time of day.

In a 10”(25 cm) non-stick skillet heat oil over medium- high heat; sauté onion and red pepper 2-3 minutes or until softened. Add mushrooms and sauté 4-5 minutes or until lightly browned; add garlic and cook 1 minute. Pour egg mixture into skillet mixing lightly to incorporate mushrooms; sprinkle with parsley if desired. Bake in oven about 12-15 minutes or until just set in the centre and no longer moist on top. Sprinkle with cheese and return to over for 2 minutes to melt cheese. Loosen around the edges with a rubber spatula and slide out onto serving plate. Cut in wedges to serve. Serve hot or at room temperature.

Variation: Instead of cooking the frittata in oven it may be cooked on top of stove over medium- low heat; lifting outer edges of omelet to allow uncooked portion to run underneath, then cover and cook until just set. Turn off heat. Sprinkle with cheese and cover to melt cheese.

Tip: Substitute 4 eggs and 4 egg whites for the 8 eggs to lower fat.

The weather was perfect, the farmers were present, and The Honourable Carol Mitchell Minister of Agriculture, Food and Rural Affairs delivered a strong message: “Good Thinks Grow In Ontario!“

Yesterday Mushrooms Canada, along with 20 other Ontario commodity groups, celebrated the bounty of Ontario on the front lawn of Queen’s Park. 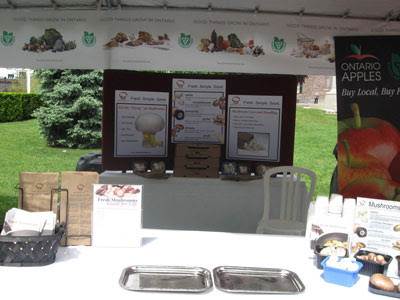 Government staff, passer-byers, and even the Minister of Agriculture perused through the mini-market and enjoyed samples of delicious Ontario foods including fresh mushrooms with dip, award winning meats from OIMP, creamy egg salad from the Egg Farmers of Ontario, and lovely apple blossoms from the Ontario Apple Growers. 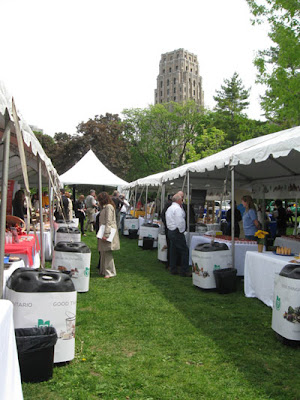 Foodland Ontario also produced this simple cooking video, featuring Emily Richards, on how to prepare a delicious Chicken and Mushroom Strudel on Baby Spinach recipe. It features a selection of local ingredients from all areas of your grocery store…. just look for the Foodland Ontario logo!

Do you buy locally whenever you can? What is your favourite locally grown food?

This is an easy version of the classic Italian recipe. Mild flavoured leeks combine with wonderful woodsy shiitake mushrooms to create a delicious treat. Serve with a green salad or as an accompaniment to veal or chicken.

Method
Cut dark green tops and root off leek; halve lengthways, wash and thinly slice. Heat 1 tbsp(15 mL) oil in a large, deep skillet or saucepan over medium heat. Add leek and garlic; cook, stirring occasionally, for 5 minutes or until the leeks are soft. Meanwhile, bring the broth to boil in a medium saucepan over high heat or in microwave. Stir rice into the leek mixture; cook over medium heat for 1-2 minutes. Stir in wine, salt and pepper; cook about 1-2 minutes. Transfer mixture to covered 2 qt (2 L) oven –proof casserole or baking dish. Stir hot broth into rice mixture; cover and bake in 400ºF (200ºC) oven for 20 minutes.

Remove risotto from the oven; stir in cream, mushrooms and parsley. Cover and let stand
for 5 minutes. Spoon into serving bowls and serve immediately garnished with shaved
Parmesan cheese. Makes 2 main course or 4 side servings

Variation: A mixture of shiitake, oyster and crimini mushrooms may be used if desired.
Tip: Arborio rice is a short-grain rice imported form Italy used specially for risotto.

This recipe is an Excellent Source of Protein

Second Place Winner in the Make it with Mushrooms Student Chef Challenge 2009.

The Mushroom burger done right! This burger screams FRESH MUSHROOM FLAVOUR! Use any mushrooms you like – not only is this recipe versatile, but it is easy to make and enjoy. Served with meaty Portabella fries and a spicy Mayo dip, this is one mushroom dish that can’t be resisted!

Method
In a small bowl, mix together shallots, vinegar, salt and sugar; set aside.

In a small bowl, mix together mayonnaise, lemon or lime juice and chipotle pepper; set aside.
In a medium frying pan over medium heat, melt 2 tbsp (25 mL) butter. Add mushrooms and garlic and sauté for 5-6 minutes or until mushrooms are tender. Add flour, cumin, thyme, salt and pepper; mix together. Remove from the pan and let cool to room temperature. Using a 4 inch ring mold, on a square of wax paper, fit ½ of the mushroom mixture into the mold and press down. Top with cheese, then the rest of the mushroom mixture. Press down gently to hold shape. In same frying pan, over medium-high heat, melt remaining 1 tsp (5 mL) butter. Carefully remove mushroom patty from mold and place in pan. Reduce heat to medium-low and cook for 4 minutes; turn patty over and cook for an additional 4-5 minutes or until patty is browned and heated through.

While patty is cooking, remove stems from mushrooms and slice into 1” (2.5 cm) strips. Set up breading station with 3 shallow bowls or pie plates. Mix together flour and Cajun spice mix in first bowl, egg and water in second bowl and put panko bread crumbs in third bowl. Dip mushroom strips to coat in seasoned flour, then in egg mixture and then breadcrumbs. Place in deep fryer and cook for 3 minutes or until light golden brown. Remove from fryer and drain on paper towel; season with salt.

Cut bun in half and spread with chipotle mayonnaise. Place lettuce leaf and warm burger on bottom ½ of bun; top with sweet and sour shallots, roasted red peppers and bun top. Serve with Portabella fries and remaining chipotle mayonnaise for dipping.

in Cooking Video / Make It With Mushrooms 0 comments
December 4, 2009

“Creamy, elegant and surprisingly easy to prepare,” says Clare Jones, home economist, nutritionist, and judge in this year’s Make It With Mushrooms Student Chef Challenge. “The team from Canadore College certainly brought their A-game when creating both their written recipe and corresponding cooking video.”

Similar to last year, this year’s challenge was extremely close with only a few points separating the first, second and third place winners, but in the end Canadore College claimed the title.

As the winning team, Canadore Collge was awarded a certificate recognizing their achievement as well as a $1,500 grant for their program, $1,500 for the student chef team, and an additional $600 for the video team.

“We plan to contribute our winnings towards our education and future competitions,” says the Canadore Student Chef team. Course Director Derek Lawday says the grant money will be used to “purchase equipment and offset travel to other competitions.”

The second place winners, Fanshawe College, were awarded a $1,000 grant, $1,000 for the student chef team, and $350 for the video team for their flavourful Fresh Ontario Mushroom Cheddar Burger with Roasted Peppers, Sweet and Sour Shallots, Chipotle Mayo and Portabello Fries.

Third place winners, Georgian College, were awarded a $500 grant, $500 for the student chef team, and $200 for the video team for their hearty and satisfying Mushroom Stampeder Dip with Sweet and Spicy Potato Chips.

This was the third Make It With Mushrooms Student Chef Challenge conducted by Mushrooms Canada. Seven community colleges accepted the challenge back in September, and each submitted a mushroom recipe and cooking video.

“This year’s challenge was distinctively different than last years, as we had removed the cook-off portion and replaced it with a video submission,” says Mushrooms Canada Marketing Manager Brittany Stager. With the demand for online cooking videos rising, Mushrooms Canada sees this challenge as a unique way to highlight fresh Ontario Mushrooms, and for the Colleges’ Culinary programs to showcase their students, culinary abilities, and facilities.

Watch the rest of the “Make it with Mushrooms Student Chef Challenge” videos on the Mushrooms Canada YouTube Channel.