It’s that time of year again! Mushrooms Canada is heading to the Toronto Wine & Cheese Show for a weekend full of gourmet foods (like our mushrooms), wines, beers, and spirits.

Every year this show gets bigger and better! Make sure to stop by our booth (822) for a sample of Simple Sauteed Mushrooms, and to pick up some NEW mushroom recipes! While you are hanging out with us, fill out a ballot to win a T-Fal Hotspot Frying Pan!

What are you looking forward to trying?

Personally, I can’t wait to see Lynn Crawford again… she is a riot!

I hope that everyone has a great time, enjoys themselves, and travels responsibly…. Don’t drink and drive! See you at the show!
…

Behind the Scenes at Mushrooms Canada: Shannon’s First Farm Visit

So I have officially visited my first mushroom farm! I have to admit, I think I have been spoiled having Murray’s Whitecrest Farms in Putnam be my first farm- it’s brand new! 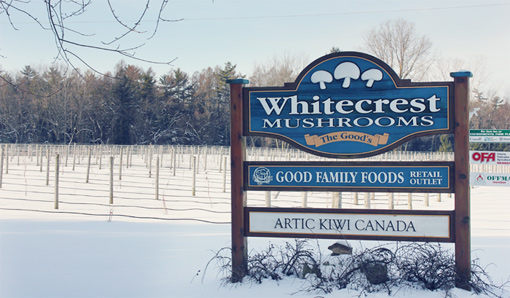 It’s certainly not the image that you conger when thinking of a farm – dirty, smelly, loud – no. The walls are white, the floors are still a nice white concrete and all machinery is the made from the shiniest metals, but enough about the aesthetics, how bout the mushrooms?! 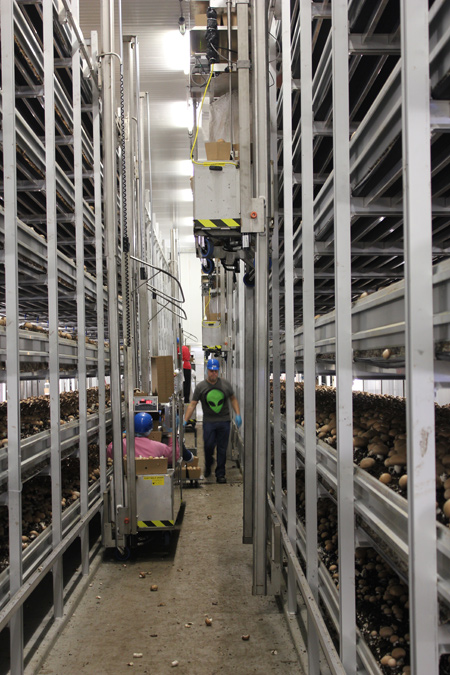 There are a total of six growing rooms at Whitecrest Farms that house mushrooms, with 7 tiers of trays measuring 5.1meters high! With the latest technology, Murray’s farm has a unique watering system that lightly mists the mushrooms from beneath the tray above and evenly coats them.

This not only cleanses the mushrooms, but also keeps them clean! Virtually every mushroom was spotless and that’s while they were still sitting in the substrate!! (I was so tempted to pull out my own for a mid afternoon snack.) 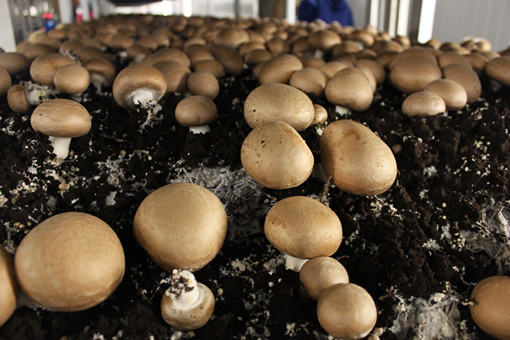 Seeing the different stages of mushroom growth was unreal! Whitecrest Farms grows brown mushroom varieties; Cremini, Portabella and Portabelini. Within 24 hours, a visible fruit property sprouts from the substrate and will then DOUBLE in size every 24 hours. Crimini are the first to be harvested and Portabella’s are left to be harvested last so they can achieve their great size. Oddly enough, nearly every light was on in the growing rooms, it’s an urban myth that mushrooms need darkness to grow- how about that?!

Once harvested, the mushrooms are put into boxes and sent across the farm on a conveyor system to be cooled on the high-tech eco-cooling spiral system. This brings the core temperature of the mushroom down to 1°C in a mere 45 minutes! This prolongs the life of the mushroom and makes sure it provides you the best taste possible! 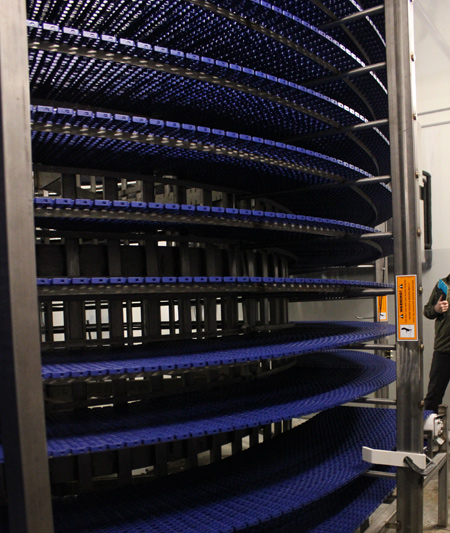 Of course I cant leave out the exciting part where both Murray and Brittany were television STARS for the Foodland Ontario crew. They were awesome and provided some really great information, especially when Brittany reminded the camera (and admittedly me) that one Portabella mushroom have more potassium than a banana! WOW!

Of course, cleanliness is key at a mushroom farm, and since I got to embarrass Brittany, I will end this little field trip to Whitecrest Farms with a photo of myself in my spiffy hair net 🙂 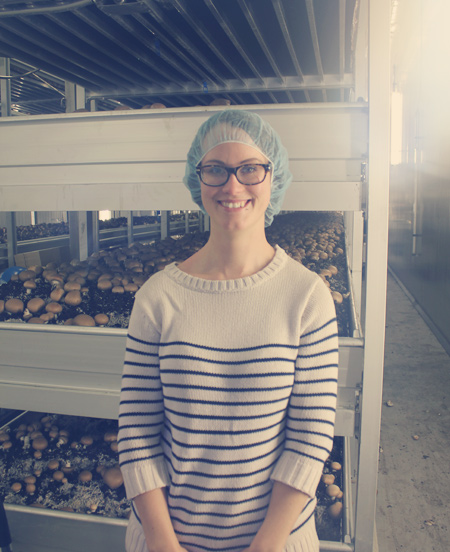 Thanks again to Murray for making my first visit to a mushroom farm a memorable and educational one – what a blast!!
…

in All About Mushrooms / Behind the Scenes / Mushrooms / Ontario / Shannon 0 comments
January 31, 2012

Behind the Scenes at Mushrooms Canada: The First Tour

This morning I get the opportunity to take the newest member of the Mushrooms Canada team, Shannon, to a mushroom farm!

I remember my first trip to a mushroom farm 6 years ago, I honestly did not know what to expect. I was, however, pleasantly surprised to see that mushrooms were grown indoors (especially since it was February!), and the cleanliness & food safety practices that were in place were astonishing. Hair nets, boots, lab-coats, and no jewelry were the strict rules.

The farm we are going to visit today is owned by Murray Good. You may remember that I featured Murray in this past summer’s Fresh From the Farmer series, where he was in the middle of constructing his new farm. Yes, Murray’s farm actually burned down 2 years ago, and he had been working hard to get it built, certified and up-&-growing again. This is great news for Shannon, because she we be seeing the newest, state-of-the-art farm in Canada.

So, I guess we will see tomorrow exactly what she thinks!

in All About Mushrooms / Behind the Scenes / Mushrooms / Ontario / Shannon 0 comments
January 16, 2012

Behind the Scenes at Mushrooms Canada: London Wine & Food Show 2012

Happy Monday mushroom lovers! I am happy to say that we officially survived another London Food and Wine Show. London ate us out of 175lbs of crimini mushrooms! Yes, 175lbs. That’s a lot of mushrooms! 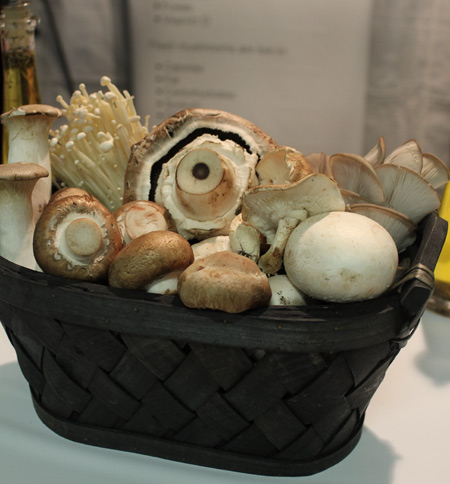 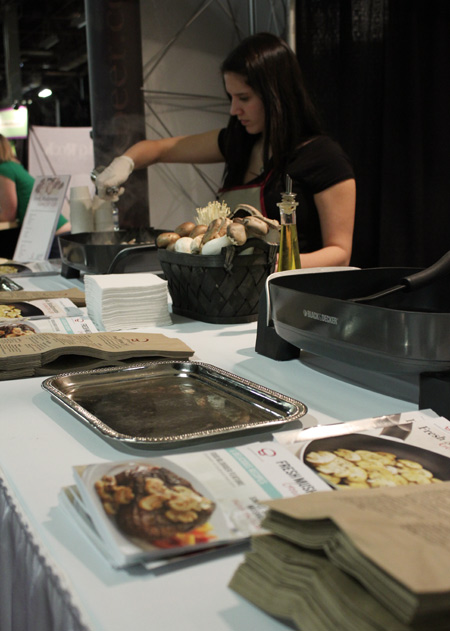 Like at all shows, we had the opportunity to mingle with some great food exhibitors, including Catering By James Meadows, The Dairy Farmers of Ontario, and Twin Pines Winery – who were all handing out delicious samples. Ted Reader, from Ted’s World Famous BBQ, also graced the Cooking Stage, whipping up a delicious bacon wrapped chicken breast and juicy portabella mushrooms.

Saturday night I had the opportunity to demonstrate an easy Mushroom Pate on the OCO Cooking Stage. 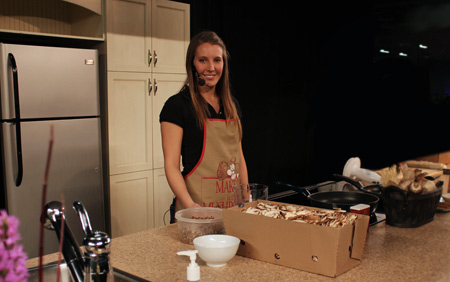 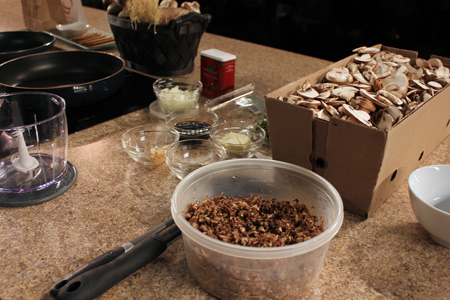 Following that, I challenged the student chef’s from Fanshawe Colleges’ Hospitality program to Make it With Mushrooms. They gathered ingredients from several other exhibitors at the show and whipped up two very different recipes, both featuring mushrooms. Needless to say, I was impressed! 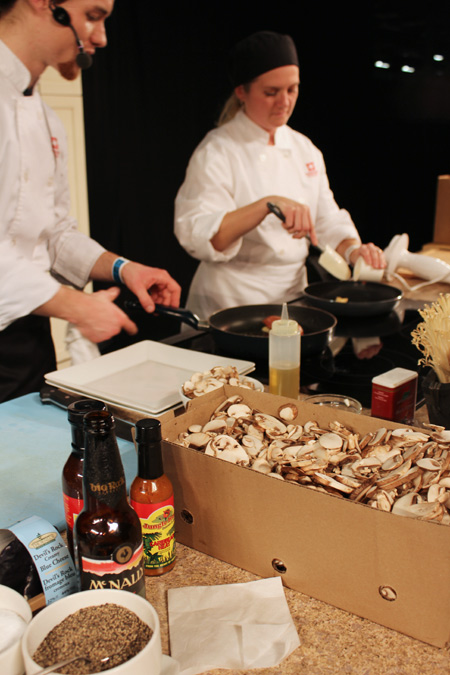 I would like to thank everyone who came out and tried a sample, asked a question, and filled out a ballot for our T-Fal pan draw!

I also want to thank my amazing staff, Shannon and Amanda.

What are you doing this weekend? How about you come visit Mushrooms Canada at the 7th London Wine & Food Show? Now that sounds like a plan!

Make sure to stop by Mushrooms Canada’s booth, for a mouthwatering sample of Simple Sauteed Mushrooms. While you’re there, enter our draw to win a T-Fal Frying Pan, or pull up a chair at the Organic Council of Ontario Cooking Stage on Saturday and watch me cook up a tasty mushroom dish… don’t miss it!

// Giveaway Alert! \
Want to win a Mushrooms Canada Apron? Well, if you are at the show and you see Mushrooms Canada Tweet: “Hey London Food & Wine Show attendees! I am giving away a mushroom apron to the 1st person to come to our booth & scream “I Love Mushrooms!” Come on by, exclaim your love, and you win!

I hope that everyone has a great time and travels responsibly…. Don’t drink and drive! See you at the show!
…